A lot of man hours have gone into this. Liberty Bridge still expected to partially reopen in August 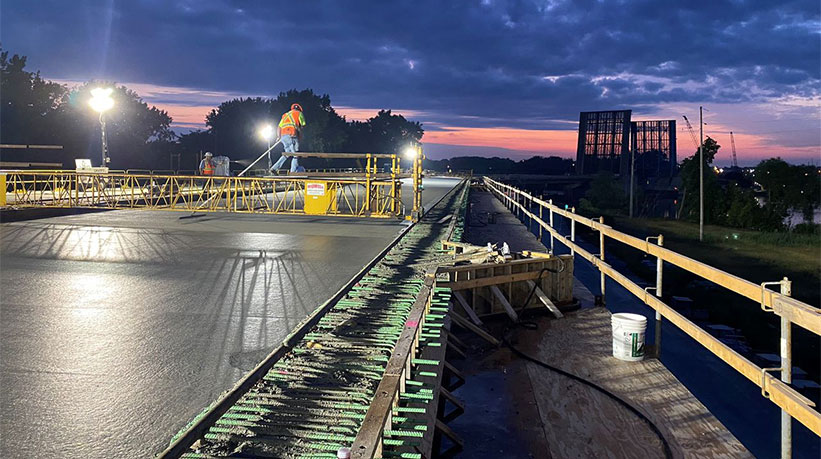 July 27, 2022 A lot of man hours have gone into this. Liberty Bridge still expected to partially reopen in August

BAY CITY, MI — Crews are getting closer to having a portion of the Liberty Bridge open for traffic in Bay City.

Community members were invited to a special event on Friday, July 22 called “Coffee with the Crew” at the Doubletree Hotel Riverfront Grille.

Attendees were able to hear an update from the crews and staff working on the ongoing rehabilitation of the Liberty Bridge.

“A lot of man hours have gone into this,” said Kevin Kruger, project manager for Granite-Kraemer at the event. Granite-Kraemer is a joint venture that is working on the Liberty Bridge.

Crews are currently working to pour concrete sections to form the bridge deck and while making sure it cures properly in the summer heat.

The Bay City Times previously reported that crews are pouring concrete at night when temperatures are lower in accordance with Michigan Department of Transportation quality control requirements.

Kruger said that two sections of concrete have been poured on the bridge so far, which together comes to a length of just under 1,000 yards.

“It was a long process to get to the deck pour,” Kruger said. “We started out here in the middle of winter doing demolition and that starts with a lot of methodical layout, saw cutting, and then we cut the bridge deck into large slabs. Once you do that, we use our excavator to pull those slabs up, and then you’re left with rectangular chunks of concrete that we have to have our laborers chip through.”

Kruger added that crews had to clean off the girders, put in rebar and ultimately pour the concrete. After the concrete is poured and graded, crews need to put the concrete through the curing process, said Kruger.

Kruger said that the plan is for the crew to “bite off a bigger piece” of the project next week. Two sections will be poured next Thursday, as opposed to just a single one at a time.

Despite some initial delays during the beginning of the project, BCBP is expecting that the project is remaining on track to meet its current goal.

BCBP began work on the Liberty Bridge in December 2021 with the goal to keep the bridge open to traffic.

Traffic was limited to the north side of the bridge at the time until a significant pothole developed, ultimately closing the bridge to all traffic in February 2022.

In May, it was announced that the Liberty Bridge would be closed to traffic longer than expected. Early estimates from BCBP placed the re-opening of the southern lanes in late June/early July. However, delays moved that perspective date up to August.

No further delays were announced at Friday’s meet-and-greet and the project is continuing full-steam ahead. BCBP general manager of operations Lynn Pavlawk said that the project is on track to have the southern lanes open to traffic by the end of August.

“I will just asterisk that with there are supply chain challenges and we’re not isolated from those, but we’re still moving towards the end of August timeframe,” she added.

Pavlawk added that the plan at this time is for a substantial portion of the project to be completed by the end of this year and that the goal is still in place to have the structure fully opened to traffic by then.